I put off and put off adding to my page about my Maine man, Lucky. You see, Lucky passed away several months ago. If a heart can break, I'm pretty sure mine did. He was ill for about a month and then I had to have him put down. It is part of life- this thing called death- but it never comes easy to those of us who cry for the one we've lost......

A couple months after his passing; a new little hellion came to our home. One day, I wanted to simply look at cats and kittens to maybe soothe the emptiness and long story short...... Mac (AKA: MacAttack) came along. Although my heart will forever belong to my Maine man; Mac has effectively (as cats tend to) forced his way in my bed, dinner plate, cabinets, lap......and ultimately, my heart.

Though one day I may have a story to tell about Mac (who am I kidding....... I have a NOVEL in the making on his antics already at five months), but this post is in tribute to my buddy, Lucky. If you'd like a little more insight to My Maine Man; check out my Squidoo tribute to my best boy here.

I read about this technique, then altered it, as I do most DIY projects, to suit my own needs. I can't believe how well it works, how cheap it is and how fast a solution to a slow draining sink!

To start with, I've had a slowwwww draining sink for .... oh, 6 months or so. Look, plumbing is not my forte' and I couldn't stand the thought of PAYING someone to unclog my kitchen sink. So I let it sit. And sit. And sit. Of course, the longer you try to use it, the more clogged it gets. After a period of time, it becomes an agitation and downright nuisance.

So I read the article, committed it to memory, and this morning after doing a major sink load of dishes and watching the dirty water just sit there eyeing me; I decided to try the method I read about.

The original "recipe" called for seltzer water or some such thing that I never have on hand and wouldn't think of picking up to unclog my sink so I substituted my old stand by: baking soda in vinegar. Now if you don't know: white vinegar and baking soda when mixed makes a volcanic reaction of epic proportion depending on quantities used.

It's always best to mix the concoction in a large container in case it does erupt. And yes, I knew that before I tried mixing 2 tbsp of B Soda in 3/4 C of vinegar and having it promptly spew foaming, bubbling white liquid over the side of the measuring cup and all over my counter top.

I digress.  As usual.

Anyway...... put 1-2 quarts of water on to boil.
Once water is boiling, mix 2 tbsp baking soda in 3/4 c of white vinegar in another container. Promptly pour this mixture directly in the drain to break up any clogs. After the fizzing stops, pour the boiling water directly into the drain. Pour it, don't dribble it in. Use the force of the boiling water in quantity which will further dissolve, and sweep away, the clog.

I've been running my water over and over just to watch it swirl down the drain. Yes, small things sometimes entertain the most but look at this picture...isn't it a thing of beauty? :-)

The moral of the story? Cheap, easy, fast......no plumber needed. Slow draining sinks are now a thing of my past. Let me know how it does for you (And if you already knew this remedy, don't burst my bubble. I'm still on a high from having it work!)  :-)

I love Christmas. I love the colors, music, decadent foods and decorating. The holiday season allows me to use as much creativity as I choose to create the atmosphere I want to achieve in my home. Sometimes I keep it simple with just my decorated Christmas tree and a few decorations around my home and sometimes I go all out. Most of the time, I'm an eclectic mix of home-spun country and Martha Stewart-esque elegance. (I know, right?) Ah well. I didn't say I was going to make any appearances on the Nate Berkus show. :-)

I wanted to share a couple photos of my holiday decor...... simple, easy and cheery. I hope the pictures come out ok. I had to use my cell phone camera because I lost my camera cable to transfer higher quality photos. 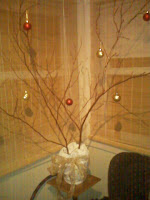 This picture is simple, understated elegance. I cut poplar branches from trees in my back yard, spray painted them with a bronze metallic paint then stuck them in a plant pot full of sand. I wrapped the pot in white paper and tied the wide gold wire ribbon around it. Finally, I hung a few gold and red plastic Christmas balls on the branches. I finished the look by spotlighting the piece with one of the light fixtures in the room. 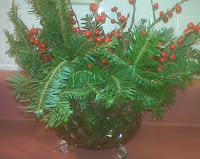 In the Northeast, evergreens abound. In many areas, these types of arrangements with greens and berries can only be ordered through LL Bean or other mail order companies. I am fortunate, not only to have LL Bean in my state, but that I can go into my back yard or nearby and get these materials and create my own centerpieces and arrangements. This one graces my bathroom counter and imparts a wonderful evergreen scent to the room.

How do you decorate where you live?

Questions on Maine or any of the topics or projects on this blog, please drop me a note. Thanks for the visit!

Shirley
Maine, United States
I have lots of interests as a freelance writer and natural health practitioner. With an array of different skills and techniques I've picked up over time, sharing what I know with others on the quest for optimal health is one of my passions. Follow my blog: Journeys of Body, Mind and Spirit, and see if any of the information there resonates with you. My other blog, The Maine Reason, is filled with projects, ideas and a little bit about my lifestyle here in the state of Maine. Enjoy.